George and Jill Nuttall have worked with the poor and homeless children of Mozambique since 2003.  With a heart for the poor, they moved to Mozambique, living and working as part of the team with Iris Ministries Children Centre at Zimpeto.

In 2007, HiM was formed as a UK charity to expand the relief efforts that were being done, devoted to helping and providing hope to those in poverty and bring help to the homeless children and people of Mozambique in order to rebuild their lives and have a future.

George died in 2013 from motor neuron disease.  His sickness was prolonged and undiagnosed for many months.  He passed away shortly after the diagnosis was made.  Jill continues to make trips to Africa to continue the work.  George’s memory lives on through the many lives he touched.

Chris and Inger went to Mozambique in 2005 and their hearts were changed by what they saw. The poverty, the hopelessness and the large numbers of orphan and street children made them want to do something. Inger returned several times by which time a firm relationship with George and Jill had been established and together they planned the vision for HiM.

Chris has had experience in finance through working in the City of London as a broker, and Inger has been a fundraiser for a number of years. They helped to form a charity, Aid Africa, in Norfolk which is helping to feed the poor in Malawi.

Christine Courage and Sally Winship joined the team as Trustees for Hope in Mozambique in January 2010.

Christine visited Mozambique in 2008 which had a big impact on her and was inspired to start a milk project which still carries on today. 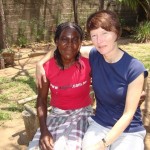 Sally is a community matron and has been many times to Mozambique.  The visits had a profound affect on her, particularly working in the city dump (bocaria) with Jill and seeing the plight of so many desperate people.  She is a great fundraiser and supporter, and continues to travel with Jill to check on the projects there.

Will you help us fulfil our vision?

If you can help in any way and would like to make a donation, please follow the link below.

Children are victims of poverty and exploitation, who are locked in a vicious cycle with little hope for the future

Out of 20 million inhabitants, 14 million live in abject poverty in Mozambique